GRANADA AND THE TIMES OF ÁNGEL BARRIOS

Granada at the end of the 19th century became a mecca for romantic travellers with Orientalist ideals, who created and transmitted the ‘dream of the Alhambra’. It was picturesque, where characters such as Chorrojumo, a gypsy braggart who gave himself a rather romantic air, could still be found – much to the delight of travellers and tourists.

It was also a ‘sugar Granada’ thanks to the prosperity derived from the cultivation of sugar beet, and was undergoing a series of reforms such as the enclosing of the river Darro, urban renewal, (with the construction of Gran Vía being one of the most important projects) and the development of public transportation (a local tram network). Julio Quesada Cañaveral, Duke of Benalúa (and later Duke of San Pedro de Galatino), and the Rodríguez-Acosta bankers, were behind this drive to develop the city both industrially and agriculturally. In short, it was a city that was emerging from its medieva chrysalis to become a modern city.

But it was here in Granada’s Alhambra neighbourhood, filled with small guesthouses, seasoned tourists blending in with the landscape, Villas and Carmenes [walled houses with gardens, typical of Granada] with whitewashed walls, trees and honeysuckle, that Ángel Barrios was born into a special and somewhat, patriarchal, family. His father, the charismatic Antonio Barrios, also known as ‘El Polinario’, ran a shop that doubled as a tavern. A ‘place of sociability’, it was located in what was the family home on the calle Real de la Alhambra, a street that was both commercial and elegant. It was a meeting place for all and sundry from near and far, of ideas or opposing ideas, traditional yet modern, both folkloric and avant-garde. Ángel Barrios did not want to miss out on anything. Even at that time of irrefutable development – progress that did not appear to really affect the hill of the Alhambra – Ángel Barrios not only witnessed these late 19th and early 20th century new technical inventions, but also actively participated in them. Some of the inventions from that time were the pneumatic piano (pianola, Edwin Scott Votey, 1895), the phonograph (Thomas Alva Edison, 1877), the gramophone (Emile Berliner, 1887), the radio (Nikola Tesla, 1894, Marconi 1895), photography (Niépce, 1826), and stereoscopic photography (Sir Charles Wheatstone, 1838; marketed by: Sir David Brewster, 1851) as well as motion pictures (the Lumière brothers, 1895). Pianola rolls, slate discs and an interesting collection of stereoscopic photographs on glass plates belonging to Ángel Barrios have been preserved.

Granada, at the start of the century experienced a generational transition, a reflection of what was happening in the country. The intellectual and official circles of Granada believed in the regenerationist ideas and views of the ‘Generation of ’98’, while the new generation, that of ’27, represented the vanguard – spearheaded by Federico García Lorca and many other young men whose battle cry aimed to change the history of culture. The struggle between these two visions was clearly reflected at the Cante Jondo Competition of 1922 – organised by the poet, Cerón, and Manuel de Falla and José María Rodríguez-Acosta among others – as well as by the bitter controversy that it sparked. Granada enjoyed the intellectual and artistic movement of the Silver Age with tertulias, or social gatherings, such as ‘El Rinconcillo’ and ‘El Polinario’, and the Alhambra was a seedbed that brought to life new ideas. This activity took place

both at the Palace of Charles V and the Patio de los Aljibes (Courtyard of the Cisterns), as well as in other parts of the palaces; from the Ballets Russes (1918) to the ‘Festival of Arts’ (1923), organised by Ángel Barrios as a Spanish flamenco response to the dance revolution presented by the Ballets Russes.

Bridging two centuries, the home of the Barrios family became the epicentre of Granada’s cultural circles. Antonio Barrios’s affable character, his talent as a painter, conversationalist and expert in all flamenco styles, improviser and scholar, made him the ‘Ambassador of Art at the Alhambra’. That house, his home, became the Mt Olympus of authentic Flamenco and its ‘jondo’ [deep singing] style. 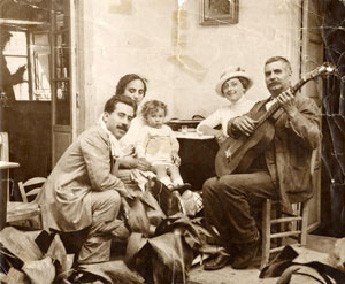 Teacher to his son Ángel, he instilled in him an age-old tradition of the guitar that was both academic and folkloric. This tradition, to which both Antonio Barrios and the guitarist Manuel Jofré belonged, stemmed from the same source: the singular Francisco Rodriguez ‘El Murciano’ (1795-1848), architect of the flamenco guitar revolution, its expressive possibilities and its influence on folkloric styles. ‘El Murciano’, an irresistibly charming man, became friends with the Russian composer Mikhail Glinka during his stay in Granada (1945-1946) and kindled his interest in this kind of music. ‘El Murciano’ passed his wealth of knowledge onto his son, who shared the same name and who was known as ‘Malipieri’. This man, a somewhat strange character, was part of La Cuerda Granadina tertulia [social gathering] together with Pedro Antonio de Alarcón and the Italian baritone Ronconi, who lived in the Carmen [a walled house and garden, typical of Granada], at the Alhambra, that now bears his name.

From the Barrios family’s home emerged the unique Tertulia El Polinario. It was headed by Antonio Barrios and his son Ángel, and they were surrounded by a distinguished group of local artists and intellectuals (Andrés Segovia, the García Lorca brothers, Soriano Lapresa, Manuel Ángeles Ortiz, Miguel Pizarro, etc.) as well as many others who came from far away, attracted by the fame of such a legendary place.

The Polinario house welcomed all artists and cultured travellers such as José Garrocha, Muñoz de Lucena, Isidoro Marín, Rafael Latorre, Sánchez Solá, José Garnelo and an entire generation of landscape painters, in addition to regulars and close friends, such as Palmer, John Sargent, Santiago Rusiñol, Joaquín Sorolla, Darío de Regoyos, López Mezquita, Rodríguez-Acosta, Ignacio Zuloaga and Joaquín Mir. Many of them left work, paintings and easels there, all imbued with their memories and their gratitude to their hosts: the Barrios family. Today, all of this constitutes the Ángel Barrios Legacy.

It was during that same century that Cafés began to spring up in cities. These places became a symbol of public expression, of the coexistence of different social groups, and the seedbeds of new ideas. In Granada, these Cafés replaced rural taverns and inns. Among the myriad Cafés in Granada, one in particular stood out from the others. This was the Café Alameda, located on the Plaza del Campillo Bajo, which, depending on the time of day, was frequented by a mixed crowd of revellers, singers, bullfighting aficionados and matadors, intellectuals, teachers and professors, artists and writers. From this group emerged the social gathering called Tertulia ‘Rinconcillo’ (so-called because it met in a rincón or corner of the Café), led by the figure of Francisco Soriano Lapresa, Professor of Philosophy and Literature, who came from a prominent family of Granada’s high society. Soriano Lapresa, in addition to being a polyglot, Latinist, philosopher, orator, and modern in every way, was also at the core of the group, supplying its members with avant-garde magazines and books from all over the world. With a fresh and up-to-the-minute style, the ‘rinconcillistas’ broke the moulds and conventions of 19th-century Granada society. This Tertulia brought together the critic and historian Melchor Fernández Almagro, Consul Juan de Dios Egea, painter Manuel Ángeles Ortiz, sculptor Juan Cristóbal, etcher Hermenegildo Lanz, the García Lorca brothers, José Mora Guarnido, journalist and writer Antonio Gallego Burín and, of course, Manuel de Falla and Ángel Barrios.

With the arrival of the Republic and the diaspora of the member of the Tertulia (Falla, Lanz, Pérez Roda, Vílchez and the García Lorca brothers), the group fragmented and formed other tertulias, but they never managed to recreate the sparks of genius that the ‘Rinconcillo’ enjoyed. That era brought a cycle to a close, ending the day of those unique characters – an integral part of Granada – leaving us with only the footprints of their presence. 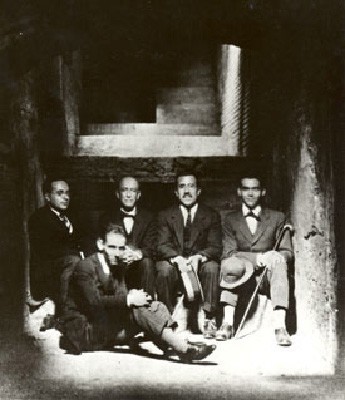 How to get there

A window with a view of time